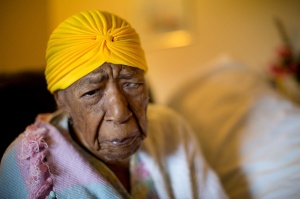 Last week, Brooklyn resident Susannah Mushatt Jones, a 115-year-old born on July 6, 1899, became the oldest person in the world. She is one of only two living people with a verified birthdate in the 19th century

So what contributes to such amazing longevity? In Jones’ case it might be bacon. According to her niece Lois Judge, Jones still eats four strips of bacon every morning, followed with some eggs. “365 days a year – that’s her meal,” Judge told the Daily News. “She eats independently every day. She gets out of bed every day and into her recliner. She eats very hearty – three good meals.”

When the Business Insider joined Jones for her daily breakfast routine, the outlet said she quickly followed bacon and eggs with some grits and then, in a unique quirk, five sticks of Doublemint gum. Her caretaker said she chews them all at once because “they’re making them so flimsy now.” She’s also willing to chew Spearmint and Juicy Fruit.

Outside of her bacon habit, the rest of her diet seems more in line with what you’d expect. Every breakfast also includes a glass of water and cranberry juice, as well as a multivitamin. For the rest of the day, Judge says Jones’s diet largely consists of fruits. She’s never had alcohol and never smoked. “She didn’t party,” as her caretaker explained it. She even eschewed coffee throughout her life.

Jones in part attributes her longevity to a loving family. Though she never had kids of her own, Jones is still visited by family every week. She can also thank good genes for making it 115 years. According to the US Census, Jones grandmother lived to be 117. No word on how much bacon she ate.