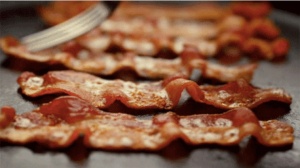 The Science Behind What Makes Bacon Taste So Delicious

The pork belly and cooking process are factors in bacon’s famously delicious flavor
Everyone loves bacon — it’s a widely accepted fact. And now we know why that is

It turns out that bacon has a certain flavor chemistry that creates its uniquely intense taste, according to the BBC. The flavor originates from the pork belly before it is cured, smoked, and thinly sliced.

Scientists have confirmed that fat is the sixth basic taste, and fat is one of the key players in bacon. When the fatty acids break down as bacon cooks, they turn into compounds of tastes and smells, such as furans, aldehydes, and ketones. Furans are sweet and nutty; aldehydes are grassy; and ketones are buttery. When combined, they taste like bacon.

Chris Kerth, a professor of meat science at Texas A&M University, told the BBC that the diet and breed of the pig also factor into how the bacon will taste. “A lot of what makes it possible to tell one species’ meat from another is traceable to the fats in membranes of muscle cells,” Kerth explained.

The curing salts and the smoking process used to create bacon create flavor reactions as well. When the pork belly is smoked, it releases a sweet-smelling compound called maple lactone.

So the next time you eat bacon, channel in your inner Remy and pay attention to all of the flavors.